Celebrating PAC-MAN’s 40th anniversary, Sebastian Masuda has created a special artwork, title: “Primal Pop, PAC-MAN Mix” “Primal Pop” meaning primitive pop culture, all the items of PAC-MAN on the canvas are from old and the most recent time. The clock ticks down for the future. 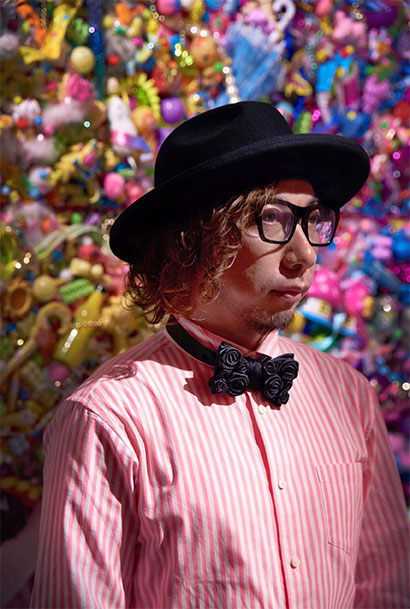 Born in 1970.Masuda started activities in the world of theater and contemporary art in the 90s.
He has been working in Harajuku since 1995 and has created works across the art, fashion, and entertainment fields with a consistent and unique sense of color.
Known as a leading figure in driving KAWAII culture in Japan, he also took KAWAII culture to the world, as with Kyary Pamyu Pamyu “PONPONPON” MV art in 2011 and the “KAWAII MONSTER CAFE” production in 2015.
In 2014 he held a solo exhibition, titled “Colorful Rebellion -Seventh Nightmare-,”in New York. As an Agency for Cultural Affairs’ Japan Cultural Envoy in 2017 he gave lectures and workshops, and exhibited works in the Netherlands, South Africa, Angola, Bolivia, Brazil, and the United States.Masuda continues to create works using all experiences in the world as his materials.